A friend challenged me at lunch today and asked; “What is the new slogan for Alberta?’ Sadly I did not remember it, even though I read several news articles and web forum posts on it just yesterday.

In case you haven’t seen it yet, our slogan “Alberta Advantage” is being replaced with “Freedom To Create, Spirit To Achieve.”

It is a tad long for a slogan in my opinion; nonetheless if our government is going to waste….err spend $25 million on this, I am darn well going to remember it.

So I came up with a new phrase using the first letter of the words from the slogan to help me remember it.

What do you think?

How did Alberta get into a deficit situation?

Some seem to think my earlier posting of “Todd’s Top Ten” is laying too much responsibility with Ed Stelmach. Certainly it is difficult and likely not fair say he is responsible for the entire state of our economy. But let’s take a look at a few facts.

First of all there are few who would deny the major driver of our economy is the oil and gas sector. Not only are they a source of a large percentage of our provinces revenue; they also keep many spin off businesses alive; hotels, restaurants and numerous service companies that cater to specific segments of the industry to name a few. All the people employed in those in turn pay taxes, which is more money in the government coffers.

Second there are many reports out there that show 2006 was the peak of the recent boom for the O & G sector. Depending on where a company was in the cycle (upstream or downstream) their peak occurred at a different point, some even early 2007; suffice to say though all were on a downward trend by the end of 2007.

There were many factors that led to this. Partly of course it was due to the natural cycle of the industry, all long time Albertans are aware of this. However, there were also a couple of noteworthy external factors that came from government.

From the federal government there was the new tax on Income Trusts brought in late in 2006, having a huge impact on the O & G sector.

From the provincial government that same year Alberta’s SRD introduced a new “Consultation Process”. The result was that it added an incredible expense for O & G businesses.

Also in the fall of 2006 the removal of the ARTC came into effect September 1 and removal of the RCIT January 1, 2007. Each of these reduced the revenue of energy companies.

It is important to realize energy sector companies plan months ahead; typically 9 to 12 months depending on the scope of a project. There were telltale signs that things were on a downswing. The drop in land sales and the price per hectare should have been one hint.

Now Mr. Stelmach was elected head honcho in December of 2006. He had been an MLA since 1993. So unless he was asleep in 2006 or just wasn’t paying attention, he should have already known the industry was slowing. The sector was also making its plans for 2007 based on those government changes that occurred in 2006.

Yet Stelmach forged ahead in 2007 with the Royalty Review and ultimately announced the New Royalty Framework. It was no surprise that at that point the oil and gas sector was saying things like; “This is the final nail in the coffin”, “This is NEP.2”. There was (is) only so much one industry can take before it has to cut its losses and seek a more favorable business climate. It is no wonder that our neighbors, BC and Saskatchewan have benefitted from our governments naiveté.

Stelmach sold the program as Albertans getting their “Fair Share”. Though in reality it would have only put more money in the governments’ pocket. I guess that’s okay if you are comfortable with the governments spending habits. Now of course we know it likely will not produce the promised extra billions, as a bigger percentage of a smaller pie is not always more.

Are we comfortable with the government spending habits? Have Albertans in general even been paying attention? We all remember and some even complain about the spending cuts and program slashing of Klein, but what has happened since then?

Well the chart below from the Canadian Taxpayers Federation (CTF) very clearly shows spending has only gone one direction ---- UP. In fact quite steadily since 02-03 and a bit of spike in 06-07. (Remember head honcho, December 06)
You can click on graph to enlarge it. 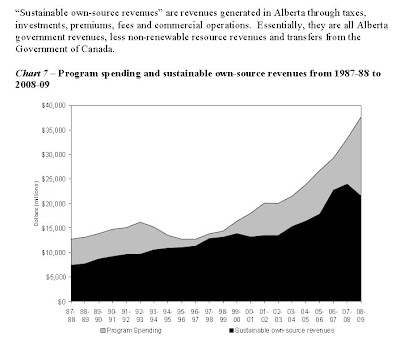 Now, it is understandable in some respects as we have grown incredibly over the years. However, should we not expect (or even demand) some restraint when the revenues are not keeping up the expenditures? We certainly would if this was our household budget; we would if this was our businesses income statement.

The CTF also point out some things that, well… seem obvious.

Just as it was a problem to be reliant on debt to fund our overspending in the 1980s and early 90s, it is a problem now to be reliant on a source of revenue that is
a) depleting,
b) dependent on a world price Alberta has no control over, and
c) has proven to be unreliable throughout Alberta’s history.

Another graph from the same report. This one trends the same and again that spike that starts in 06-07. 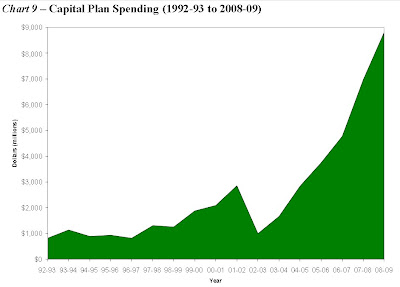 And the most alarming is the commentary that accompanies this graph.

Alberta’s labour force has grown by 20 percent since 2002e. It stands to reason the number of roadway building and construction companies in Alberta has likely not grown by much more than what the labour force would allow. However, the Alberta government is spending 780 percent more on capital projects in 2008-09 than it spent in 2002-03.

Now back to who is responsible.

I think we all are in some respect, we have allowed this to continue year after year, unchecked. Too many of us believe that government will take care of us, that they will do what is best for us and the province. We believe or at least like to, that the people who run for office really care about their constituents. Sadly though they have, for the most part become too complacent and out of touch with reality.

Recently I had an opportunity to have a long chat with a sitting MLA. Surprisingly we had much in common and their stance on most issues was more inline with the Wildrose Alliance Party than the PC’s. I asked why they ran for that party then. The response was because they knew they would be on the winning team.

It’s attitudes like that within the PC party that put all Albertans on the losing side of the game. It is our lives, our livelihoods and our children’s future that they are playing with. Hopefully some of them will wake up, find their moral compass and start to stand up for Albertans.

CTF website.
Report referenced: "A Prescription for an Uncertain Future"
Another worthwhile read, "Trouble on the Horizon"
No comments:

Reprinted with permission from the author; Todd Loewen.

10) Adding in extra elections for strategy rather than democracy is expensive.

8) Alberta cabinet ministers give themselves 30% pay raises in May, costing more millions.

7) Ed Stelmach and crew make $1.3 billion election promises in the two weeks before election to ensure re-election. Your vote is expensive to buy; with your money!

6) Albertans realize after the regional health boards are dismissed that it costs a lot to have appointed executives, but even more to fire them.

4) Even though oil prices plummeted, Stelmach and Evans kept spending.

And the number one reason Alberta’s in a Deficit:

Cool, I have my first "follower".
Thanks Leigh.


Today I am pleased to introduce another blog that I will be authoring. For now it is called From the Executive Director's desk. If you can think of something a little catchier, let me know.

The new blog will be exclusively for Wildrose Alliance Party information; so likely this one will shift to being more about me and have less party content.
No comments: