Video compilation by my hubby.

For more on this issue several posts can be found here.

For your listening pleasure.

Embedding has been disabled so a link will have to suffice.

Must see (or rather hear) video of Susan Boyle.

What a difference a year makes.

“A Progressive Conservative government will never put Alberta back into a deficit position,” said Stelmach. “We have a plan that provides the services and infrastructure to Albertans, while keeping more money in the pockets of Albertans. Our plan is realistic and achievable. It works for Albertans.” 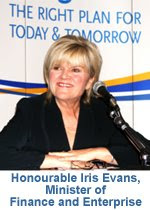 OOPS, we thought it was the right plan for tomorrow. 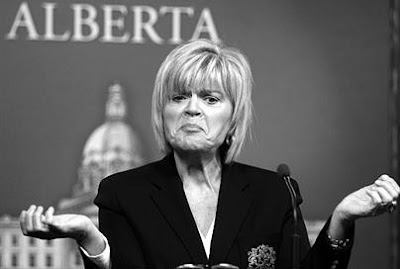 Do I dare ask, what strength would that be?
1 comment:

I knew it would not take long for the PC's and their supporters to start and spin the 2008 financials that were recently released.

First a couple of bottom lines I would like to point out in case you haven't been following it.

So the most recent spin I have see can be read here.

Here are my comments, just in case they don't get published over there.
:)

The WAP has always been a pro-business party; whether it is the O&G sector, farming or Joe Blow with a corner pub. For over 7 years now our position has been one of creating a business friendly province and minimizing the size and intervention of government. If that makes us “extreme right” then I guess we are guilty. Ironically, just about every “average Albertan” I know either works for a business or owns one that employs other average Albertans.

You can spin it if you like, but the reality is we were saying “No” to the NRF before anyone else dared comment and also before any $$ came our way. Not the other way around. Just for the record, our contributions from individuals exceeded those from corporations.

Between March 25th and May 21st we will hold at least seven (7) events that are free to all Albertans; members and non-members alike. On the flip side the PC’s will hold 3 events during that period and charge over $400.00 per plate and you must be a member (granted they are serving food). They also have at least another half dozen that are $100.00 to attend. Are those the “average, everyday Albertans” they are reaching out to?

It is also interesting to point out that the bulk of the PC contributions came to them after they won the elections. Which begs the question who is currying the favor of whom?
2 comments: