Some may remember Alnoor Kassam; he has twice run for Mayor of Calgary.  He announced his running on Twitter in March 2010 (or there abouts); then in June he again announced his running.... It was all rather funny and somewhat embarrassing as he tried to deny he that he had previously announced.

It's a lesson all politicians and would be politicians should learn. You only get one chance at "launching" your campaign.

Enter Chris Tesarski. He is aspiring to be the Leader of the Alberta Party. He mused about this in December and Sheila Pratt of the Edmonton covered it; albeit very buried in late paragraphs. Chris responded with this blog entry.  A couple bloggers commented, there were a few tweets; but really no great attention paid. Chris then presumably "firmly" decided to declare he was running and tweeted it. 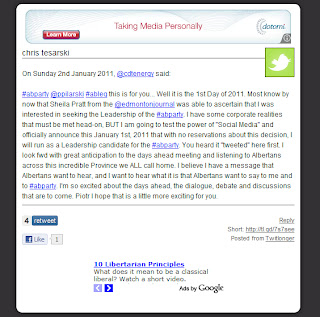 On January 24 Dave Taylor (former Liberal MLA) joined the Alberta Party.  There was a lot of speculation that he too would enter the leadership race. And some would say he would be a logical choice.

So it was no surprise when Chris just three days later stepped down. His very thorough and long winded explanation can be viewed here thanks to Google cache. He has, for whatever reason deemed it necessary to delete this from his blog.

What is surprising and somewhat disingenuous is that this week Chris Tesarski is "announcing" he is running for the leadership and presenting it as being newsworthy.

I have no problem with people changing their minds. However, they should present it that way. In my opinion the approach he has taken is very disrespectful of the other two candidates in the race.  Will we see them all "re-launching" every 3 or 4 weeks?

And why has Chris changed his mind? Why is he hiding the fact that he previously stepped aside?