This post certainly will fall into the "Up close and personal" side of me. And is mostly for the benefit of my family that is spread around the globe; Australia, Arizona, the Netherlands, Saudi and of course across Canada.

I am so happy with the new little man in my life. (see pic in previous entry)

I am very proud of my daughter who did an awesome job of dealing with labor for over 10 hours before deciding to try an epidural. Sadly even after 18 more hours of labor, the baby would just not come; he was head down, but not properly engaged. His heart failed several times in the last hours and it was very difficult to watch.

At about 11:55 AM the docs decided the only option was a C-section. At 12:11 PM he entered the world. I was not allowed in to the operating room, but once they found he was in perfect shape they brought him into the recovery room to meet me, he was only 10 minutes old!!!

I cannot begin to describe the feelings that overwhelmed me when I saw him. It was probably only 30 minutes before my daughter would appear. Those 30 minutes felt like an eternity. He was weighed, measured, poked and prodded; and he took it all in stride. He is one of the most alert and calmest babies I have ever seen.

While my instant love for him poured out; anxiety about my daughter continued to mount. Finally, dad arrived to tell me she was fine and would be in soon. When she was rolled in, we were able to share with her just how big the "little bundle of joy" was....

M.. T... and new T..... I love you all very much and thank you for giving me the greatest Christmas gift I could ever envision.

Only have a couple of minutes to post.
Finally 10 days overdue and over 24 hours of labor we have our first grandchild.

A very beautiful, big and healthy boy. He is less than an hour old here. 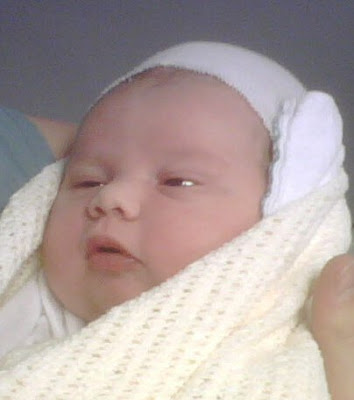 I will post more details once the new mom and dad have been able to contact all of their friends.

Alberta is fertile ground for spawning political parties and there is no shortage of ones that have a separatist leaning. To name a few; the Western Canada Concept, the Republic of Alberta, the Republic of Western Canada, the Alberta Independence Party, the Separation Party of Alberta, the Western Block Party and maybe one or two that I have missed. These cover both federal and provincial endeavors.

They have a couple things in common:

1) Generally it is the same perennial group of people trying to catch a wave of angry Albertans.
2) They are considered just extreme enough that it is difficult for the general public to take them seriously.

It is no secret I have a soft spot for these guys, however I have a stronger belief in Canada and would prefer Alberta strengthen its position within our country. So it is no surprise this has been the source of many heated discussions in our household.

It only took four short weeks of campaigning, when Cory ran as a SPA candidate, for me to realize the S pill is way too big for people to swallow. Sure others will point to surveys that say 20+ or 30+ percentage of Albertans are willing to discuss or explore independence, but the reality is they will never, en masse, support a party whose sole goal is separation and actually put an X on the ballot for such a party.

I have a strong belief that for those who want to pursue independence and educate other Albertans of the benefits; it should be done through an advocacy or lobby group. That group can then pressure the government of the day to put it forth on a referendum as per the Clarity Act.

When people ask me what they can do towards this goal I make two general suggestions.

1) Contact your MLA; determine their position or in the case of some parties, the party position. Also look at the parties platforms; do they have a position on the Clarity Act and referenda.

2) Direct them to the Alberta Agenda website, which is an off-shoot of the Alberta Residents League.

The ARL has been organized and operating for over six years. They have been successful in developing a network across the province. They actively advertise and educate Albertans on the advantages of the Alberta Agenda items. They have also dedicated a lot of time (and I suspect funds) in solid research of the Agenda items.

Which brings us to the newest kid on the block, the Western Business and Taxpayers Association who in their initial press release announced the; “Separatist Business and Taxpayers Association Created.” They started out saying they might just a group or they might morph into a party. Since then they seem to have dropped the party goal. Bouquets of Gray has done a superb job of following the developments.

I know many of the individuals who are on the WBTA board. I will not comment on their individual strengths or weaknesses, but I would like to call into question why they are trying to invent something that already exists with the Alberta Agenda group? Why not put their efforts behind something that is up and running?

As a CFO for a provincial party, the other thing I must really question is what they intend to do with the funds they raise. They say they will “… fund any and all who share our vision of a new nation.” From this and one of their other points it would appear they will be making funds available to candidates and/or parties. Which begs the question; why would one donate to them rather than directly to the candidate or party and receive the tax benefit of it?

The long and short of this is that we do have separatist leaning individuals in our province; they certainly are not a majority by any means. And until they can “unite” those who want to "separate", it is unlikely to get any traction.
7 comments:

Calgary, December 2, 2008 - In light of the blatant power grab shaping up against the democratically-elected federal government, Wildrose Alliance Leader Paul Hinman is calling on Premier Stelmach to show leadership on behalf of Albertans and Canada to ensure the country stays strong and united.

"Premier Stelmach needs to serve notice that the formation of any governing coalition that requires support from the Bloc Quebecois, whose sole purpose is the break-up of Canada, will result in a complete withdrawal of Alberta from the Federal Transfer Payment Program," Hinman says. "Alberta cannot stand by and support with its tax dollars, opposition and separatist parties which conspire and coalesce for power and money."

"It's bad enough now that federal dollars are extorted from other areas of Canada so the BQ Party can further their agenda," Hinman says, "but to see the Liberals and NDP actually getting into bed with the separatists is unconscionable and not in Canada's best interest."

Hinman also emphasizes the fact that the timing of this blatantly political maneuvering couldn't be worse and will only continue to erode the confidence of Canadians and foreign investment in our economy.

Premier Stelmach must serve notice now that "as long as there's a government in Ottawa beholden to the separatists' agenda, our contributions to the federal coffers must stop. Alberta has been a major contributor to the success and strength of a united Canada." He asked the premier take the following actions immediately, before any confidence motion is brought forward in Ottawa:

1. Serve notice of Alberta's intent to withdraw from the current Federal Transfer Program.
2. Initiate measures for Alberta to begin collecting its own taxes;
3. Initiate discussions on a Regional Equalization Program involving the four Western Provinces;

"The Wildrose Alliance Party believes in a strong confederation. We also believe it is the strength of our communities and province that makes Canada strong." says Hinman. "We cannot support parties who enter into alliances for the purpose of gaining power with a divide and conquer strategy along with the BQ who desire to destroy our great nation."

The Wildrose Alliance leader calls upon our premier to stand up for Canada and Alberta by putting the governor general and the opposition parties on notice of our intent to pull out of the destructive, divisive, faulty formula Federal Transfer Program if a coalition government is formed with the BQ. Alberta will not stand by and watch our home and native land be shattered.

I would like to extend congratulations to my husband, Cory Morgan, on his recent appointment as the VP of Policy for the Wildrose Alliance.

He is no stranger to the politically arena and I can't help but think that the timing of this seems a bit serendipitous
No comments:

Time for some fun with Stelmach

Feel free to caption this photo in the comments section... 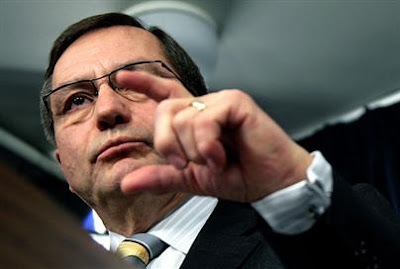 Try to keep it clean... be creative.
4 comments: