I would like to applaud the Alberta Party for being open and transparent by not only live broadcasting their AGM, but for leaving the videos available for all to see.

Unfortunately though, I do have to question the transparency of some of their policies. I don’t get me wrong, this is not a problem unique to them; all parties are subject to this. In many respects it boils down to human nature. We all have preconceived ideas on what certain words mean. When words are strung together as policy, we envision different outcomes from them based on what we personally believe the implications to be.

In my opinion policies should be as clear and concise as possible. Certainly, not everyone will agree the policies and that’s why the various parties (and supporters) debate the merits of particular policies. What really muddies these waters though is when a policy says one thing and the members of the party who approved the policy don’t even agree on what it really means.  This is in essence was came out of a debate on Twitter last night.
I was watching (and/or listening) to the video segment from the Alberta Party AGM on agriculture policy.  At the conclusion of passing the various AG policies, a question was asked about how urban candidates would discuss the agriculture policy at the doors. I was taken aback when I heard someone say “the consequence of what we have voted for … are policies that restrict urban sprawl by preventing the movement of farmland to be sold to developers.” This is paraphrased; you can hear the exact wording here at the 1:30:40 mark.
My immediate interpretation based on that statement was; Alberta Party would restrict farmers whose land borders on cities from selling their land to developers. But let’s be honest; that would be an absurd policy.
I noted that Danielle Klooster was on Twitter. She is the Alberta Party candidate for Innisfail – Sylvan Lake, a predominantly rural constituency. She was also at the AGM and spoke to a number of the policies. Who better to ask for a clarification of what I had just heard. You can see the conversation string here.
Basically she says “restrict” is not the right word. And goes onto say there needs to be a balance of what’s best and fair. Remember this is their policy that they hope to enact if elected. It would be the government deciding what is best and fair; thus interfering on who the private landowner could sell to.
Then Chris Labossiere, past-president of the Alberta Party, came into the conversation. Twitter stream.  He says regarding the policy it’s an “INCENTIVE to find a way for farmers to get the value of their land.”  By this time I’ve located their written policy proposals so I can read the exact policy in question. It reads as follows:

Be it resolved that the Alberta Party will work with the agricultural community to help develop initiatives that facilitate the continuing availability of farmland in Alberta through succession strategies, the promotion of initiatives to increase farm income, and to bring new farmers into the industry.

I point out to Chris that the policy has no mention of land value. Of course he asks “Then where did you get that idea from?” Well, let’s see, the initial comment I heard in the video, Danielle referred to it and so did Chris himself.   That’s about when Chris lost it and responded with this. You can click on image to enlarge. 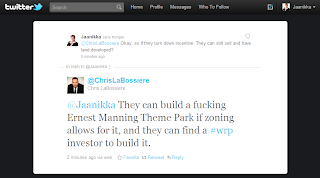 Rereading the policy now it’s really not clear on the definition of farm income. Granted the first thing that pops to mind is revenue from the sale of product; but really it could be revenue from the sale of land as well.
I’ve gone back to the video to locate where the policy was discussed to get a clearer picture of the intent of what looks like to be a benign policy. Surprisingly there was no debate on it. Simply commentary from Michael Walters, Alberta Party candidate for Edmonton – Rutherford.  (Who the Liberal party recently tried to woo over) You can hear the policy read out at the 1:08:35 mark,  Michaels comments and then the quick successful vote passing it into their policy platform.
I’ve listened to it several times and I’m no closer to understanding what they really mean to accomplish with this policy.
Is anyone clear on it? I would love to hear what you think; especially Alberta Party members who will be conveying this to Albertans.
15 comments:

I said it (Twitter ‘ed it actually) a couple of months ago and a few weeks ago; that I thought Alison Redford might pull off the win.  I had no basis for my prediction, it was a just a gut feeling.  Now that they are going into the second round I’m getting a clearer picture of how this might come about.

Despite umpteen current MLA’s lining up behind Gary Mar and his high percentage in the first go round, there seems to a lot of hatred out there working against him.  I think in order for Gary to win he has to achieve his 50% at the first count on October 1st.  If it goes to the second count it will go to Alison.

Here’s why (in my opinion)

Gary Mar’s supporters likely won’t put a second choice on the ballot.  They will want to avoid a “Stelmach” or “Dion” third placer coming up the middle. Redford and Horner supporters are far less likely to be worried about this; their main beef is with Gary and keeping him out of office.  They will mark a second choice. Redford supporters for Horner and vice versa.

I think Horner will be in third. This is partly based on the showing after the first round and I believe Redford has a more organized campaign. (Granted, I could just be thinking this way because I know some of the people involved and I live in Calgary where she has a greater presence.) Either way, I think his supporters will be quite comfortable in putting a ‘2’ beside Alison’s name.  She is from their current cabinet, but still new enough and she is saying the right things to offer that glimmer of hope the PC’s so desperately need.

Conversely Mar, is so many things they are trying to distance themselves from. Bussing in “supporters”; rumors of leaking a members list to media; rumors of offering plum positions to those who back him; generally old-school distasteful politics.

Should Redford pull it off… well she will have monumental, if not impossible task ahead of her.  As I understand it Alison has the backing of a handful of MLA’s: Doug Elniski, Kyle Fawcett, Art Johnston, David Xiao and Dave Rodney.  With the exception of Rodney they are all first term MLA’s and Johnston won’t even be running in the next general election, having lost his local nomination.  She will have to regroup the other MLA’s; mostly made up of long term members who now clearly stand behind Mar, and there are a LOT of them.

If I’m wrong though and Mar wins, there are two things I’m looking forward to.
1)      The caucus funding to the PC’s to be cut since they no longer will have a Leader in an elected position.
2)      Their caucus putting out press releases, but not being able to name their “yet to be elected as an MLA, Leader”.


If you aren’t familiar with the background, one might say, “That’s absurd. Why would those things happen?’ You can read it for yourself, here and here. It’s exactly what the PC’s did to the Wildrose.

PS: I don't choose the ads that display on my blog and in no way support nor endorse any candidate who might happen to show up. :)
4 comments: