Glenn Taylor: Mayor or Party Leader Can He Be Both???

Well Monday morning has come and gone. Glenn Taylor, new leader of the Alberta Party has not stepped down as Mayor of Hinton. I listened to him on Rob Breakenridge last night on QR77 last night and Glenn has made it clear he will be staying on as Mayor at least for now.

To me it is pretty straight forward that someone who has been elected as the leader of a party; should not also hold another elected, non-partisan position that is paid for by the taxpayers. Glenn justifies it by saying his role a Mayor is “part-time” and that realistically at this point the role of leader is also “part-time”.

Here is a quote from the interview where Rob asks Glenn about stepping down:

Well, I haven’t resigned from it yet and there’s discussion to come with my council and my community about what the transition plan will look like. Course most mayors in Alberta, the smaller municipal level are expected to have to have part-time jobs. And the mayor’s roles are usually based on the meetings you attend and a small honorarium for the work that you do in between. So really they expect you to have a part-time job. And I guess when you really look at it, the Alberta Party at this point as we are building, is still a part-time job. But there is a transition plan that needs to be built and I will do that with my council and my community.


I’m not sure what this “transition” plan is all about. We have Municipal Acts and Election Acts in Alberta that cover what happens when a Mayor steps down. I’m fairly confident his council will support whatever Glenn and the Alberta Party want to do. After all every one of them is an Alberta Party member; the deputy mayor is even on the local Constituency Association for the Alberta Party. This information was obtained from Glenn’s own website. Here is a screenshot of it. (Click on image to enlarge)

I’m very interested in Glenn’s definition of “part-time” and of “small honorarium”. To me part-time is roughly 50% of normally work week, so 20 hours. Anything less than that, one would be inclined to say “very part-time”. And a small honorarium to me sounds like a token amount; an amount that likely someone wouldn’t be able to support themselves on, especially since Glenn adds that they “expect you to have other part-time work.”

I’ve searched Hinton’s website and was unable to find any reference to the total time commitment for council. There indeed are two regularly scheduled council meetings and two standing committee meetings each month. And with the “work in between” as Glenn described, I think it’s very likely the Mayors job could only take 20 hours a week.

What I did find this though, the 2010 audited financial statements for the town of Hinton. If you go to page #21 you will find this. 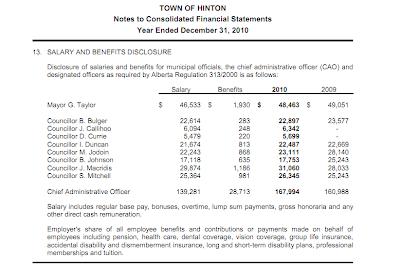 As you can see the salary includes honoraria, however it also includes base pay, bonuses, overtime, lump sum payments and any other direct cash remuneration. In Glenn’s case it totaled $46,533.00 last year; not including benefits. That works out to nearly $45.00 per hour, not bad for a part-time job.

Don’t get me wrong; I’m not saying he’s not worth it or that we shouldn’t pay elected officials fairly. But I do have an issue with them presenting it to the public as a “small” amount. There are many working families out there struggling to make that type of income. To have an elected official brush it off as a “small amount, requiring a second part-time job” is insulting.