On May 28, 2011 Glenn Taylor was elected as leader of the Alberta Party. Glenn Taylor is also the Mayor of Hinton. I discussed this conflict at length in a previous post, which I wrote on May 31st. Some said I jumped on him too soon; that I should have give him some time; that he would step down as mayor in due course, etc, etc.

On September 27 via Twitter, I asked Glenn this: "When will you be transitioning from your Hinton Mayoralty position?" I figured four months was plenty of time for him to have stepped down.

This was his response:

I'm still working on that. My wife and I, my council and I are discussing. 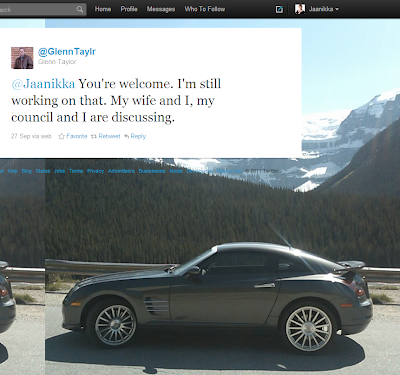 On October 1st I suggested he should blog about his transition; he replied with “OK".

Four months and counting on what should have been a “no brainer” decision. I think it’s clear the party doesn’t have the funds to pay him a salary. It’s also clear they are very happy with having a part-time leader.

To me this boils down to a matter of ethics. It shouldn't take someone four months to decide what is the right thing to do in this situation. In fact it should have been something he gave a lot of thought to BEFORE he ran for leader.

OR perhaps it's a case of the party not being honest with the leadership candidates. Were they advised that there would be no salary? That it was to be a completely unpaid, part-time volunteer position?

Let’s not forget he has the bulk of the Hinton town council sitting on his local Alberta Party constituency board. It makes one wonder exactly how much “party” work they are doing while they are being paid by the municipality.


BTW Glenn, that's a pretty sweet car. I had looked at the Crossfire, but damn they were pricey.

Just had a bizarre conversation with this Alberta Party supporter. Best quote from her:

everyone relies on taxpayers (duh) but if u reference some rule I hv no idea about - I hv no idea. Ideas r what counts.

You can read the entire string here.