A Black Cloud Over the Alberta Party

In my last installment regarding the Alberta Party I outlined the three steps to rescinding or amending party bylaws under the Society Act. I dropped a couple of hints in that posting and I suspect they will have caused either the Alberta Party or the Renew Alberta group to do a bit of homework. As such the information in today’s entry should not come as a huge surprise to them.

I will preface this also with: This is not an unusual situation, in fact I have been through similar experiences with two other parties. As well I have heard that this once happened to the PC’s many years ago.

As a recap here are the three points in the Society Act regarding changing bylaws.

15
(1) The bylaws of a society shall not be rescinded, altered or added to except by special resolution of the society.
(2) No rescission or alteration of or addition to a bylaw has effect until it has been registered by the Registrar.
(3) If the Registrar is of the opinion that a bylaw is not in accordance with the application for incorporation or that it contains anything contrary to law, the Registrar shall refuse to register it.

Hhmm, okay we’re going to have to presume they have filed the resolution with the Society’s Registrar and that brings us to the third requirement.

As everyone knows one should never presume or assume anything. So I went to my local registry office and requested the appropriate searches and received the documents. For now I am only going to post the relevant sections.

This first one is a summary of all the submissions to the Registrar since 1998. 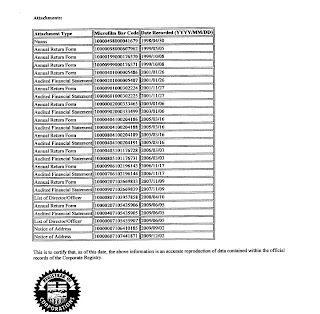 You will see generally each year they have filed their Annual Return and Audited Financial Statement. These along with a list of current directors are the basic requirements to keeping the non-profit society active. You will note they filed changes to the directors on Oct. 4, 2008 and again on June 5, 2009. The most recent activity has been two change of address; Sept. 2 & Dec 2, 2009.

There are two things that really stand out as “missing” on this. The first is that we know they elected new board members at the Oct 2009 AGM. When I look at the list of directors, the new ones are not registered. (I won’t be posting that document as it has everyone’s home address on it.)

The second thing is there is no mention of Bylaws or Special Resolutions being submitted as required by the Act. To illustrate what it would look like here is a portion of the same report from the WAP.

I also received a copy of the bylaws on record with the Registrar, but they were dated August 1985. I thought surely there had been some update or amendment since then. I emailed the registry office and asked if there was a more recent copy of the bylaws, perhaps they missed sending me a couple of pages. (There were over 60 pages, so it was possible). This is their response.

No changes to the bylaws have been filled.

What does this mean you ask? Well, it means the Alberta Party is still operating under their original bylaws (constitution) they filed in 1985 and not the one they circulated at the 2009 AGM. (The one I have posted)

Unfortunately, it also means the October AGM was not valid. In the bylaws that are in effect the quorum requirement is as follows:

My head count at the meeting was 37. Of that 2 of us were observers and 2 were children of one of the members. In Charles' letter to me he says it was 40% of the membership. 40% would be 40 people. At the meeting they reported the total membership in good standing was 99. I am not going to split hairs over whether it was 33 or 40 people; the fact is it wasn’t the required 50 people.

With the meeting being invalid, it means any resolutions passed are also invalid. In order to get their desired resolutions past they will have to have a meeting of members and meet the quorum requirement as per the above. If their membership numbers are now up to 500, they will need to have 250 people at the meeting.

Then they will have to "actually" file the Special Resolutions and they become effective once the Registrar approves them. And as I mentioned in my previous entry; I highly doubt they will approve a resolution that contravenes the Society Act itself.

There might be one silver lining to this black cloud though. They don’t have any policies! The bylaws in effect don’t mention policies or even make reference to how they would be developed.

They do however have principles: 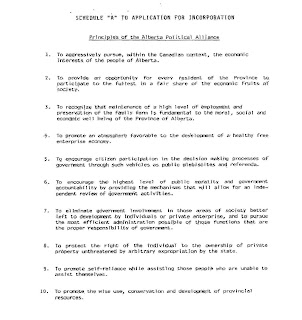 I will be posting the full text of the bylaws, but will blank out the names of the original signators. If any member of the Alberta Party or the Renew Alberta group would like the full report (that I paid for LOL) from the registry search, I will gladly email it to you. You can find my email address in my blogger profile.