At around 10:30 PM (yesterday now) I noticed a new member on Twitter, WAPwatch. At first I thought it might be my old internet friend resurrected. But alas, it is not. My old nemesis would have been a little bit smarter and I would not have been able to figure out the real identity so quickly.


Here are two screen shots taken at the same time. You will see the first posts of WAPwatch. (made at 8:23 PM. according to Tweetdeck) 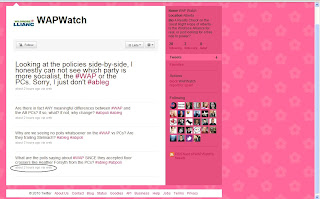 And here you will see his followers. (Note: I have blocked out the other follower from the screenshot at their request, as they are no longer following) 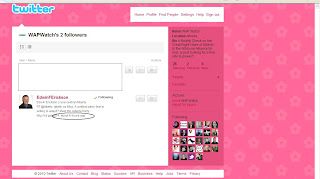 You will note that the first follower, Edwin Erickson started following WAPwatch a full four hours before the first tweet. Before even one Tweet with any hash tags was posted.  The only way he could have known about the account and started following it before any tweets, was if he (or a cohort) created it.

Since then Edwin Erickson, I mean WAPwatch has been going through all of my followers and has started to follow them. 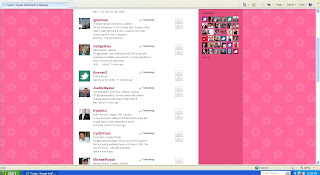 I suspect by morning WAPwatch will also be following everyone I am following.  Interesting that he chose pink for a background color. Presumably to lead one to believe it was a woman. Or maybe Edwin really does like pink.

Editted to add:
Joanne points out in the comments that this timestamp is of his last Tweet. And I stand corrected; I took it to be the follow time. Nonetheless, clearly he was the first on the bandwagon of this unusual twitter'er. I see this morning the following list is a mirror image of those following me.

Edited to add:
You will no longer find me on his list as I have now blocked him. I recommend my family do the same.