A while back I had an anonymous comment and in my response I hinted that I knew where they were posting from. You can see it here. I thought that would be enough to enlighten them that they are not completely “anonymous” and since there were no subsequent comments from them on that entry… I figured they got the hint.

That is until today, when I got this second comment from the same IP.

Everyone already knows that the Wildrose Alliance is radical, extreme right wing, redneck, and far right. Now add petty to the list.

Clearly a comment with no evidence to support their claim and likely intended to stir things up. Well, be careful what you wish for.


Upon further digging I have discovered that since late March this person has been all over all of my blogs. Here is a screen shot of the IP in question. (You can click on the images to them full size)

As you can see there have been multiple visits over more than one day; also no referring link, so they likely have my blog bookmarked. None of this is unusual. The interesting aspect is the source, Alberta PWSS. Which is short for Public Works Supply and Services.

Now I get a lot of hits from the Legislature and the House of Commons. However, none of them have taken the risk of posting from their publicly funded offices while they are supposed to be earning their salary. (Also courtesy of the taxpayer)

For the heck of it I Googled the IP address, it netted several results, most simply showing stats for this IP. One did confirm this IP is registered to the Government of Alberta. 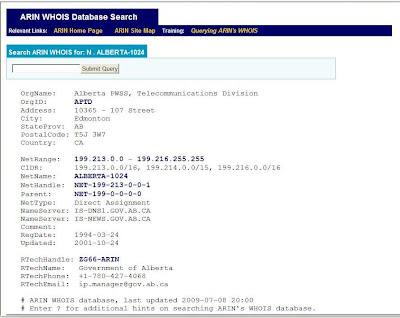 Another caught my attention, I recognized a very familiar name, Kevin Taft. Of course I had to click on it and it appears to be his constituency website. Here is a close up of the relevant information. 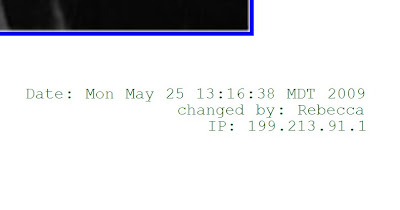 A search for “Rebecca” within Taft’s constituency website nets 22 results of posts made from (coincidently) March to as most recently this week from the same IP.

I have tried to find exactly what they "do" at Alberta PWSS, but no luck so far. It does seem odd though that their tasks would include updating MLA’s constituency websites. I would think that task would more likely be done by staff within their own office, by an independent webmaster or even by a volunteer. (The latter being most likely for the Liberal Party)

Of course the more interesting question is why is someone from Alberta PWSS spending their workday surfing and posting on blogs at the taxpayers’ expense?