Decline Comment Urquhart 'errr Diane Colley-Urquhart is adamantly claiming she has not changed her mind regarding her aldermanic position. Yet, her very own words tell a very different story. 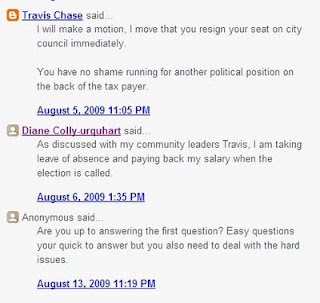 Very clearly she states she is taking a “leave of absence”. The Wiki definition:

Leave of absence (LOA) is a term used to describe a period of time that one is to be away from his/her primary job, while maintaining the status of employee. This term is in contrast to normal periods away from the workplace, such as vacations, holidays, hiatuses, sabbaticals, and “working from home” programs, in that they are considered to be exceptional circumstances, rather than benefits. Generally such an arrangement has a predefined termination at a particular date or after a certain event has occurred.


Colley-Urquhart said her decision to stay on as alderman was made after consulting colleagues and advisers. She said she'll pay back the aldermanic wages that she earns during the campaign period.

“Stay on as alderman” is quite different than “leave of absence”.

Both times she refers to “discussing or consulting others”. Which begs the questions; is she getting “advice” from multiple sources or are they the same ones who are changing their minds? If so, why doesn’t she stand up to them? Or is it Diane who is changing her mind?

Either way, it boils down to; at best very poor optics and at worst (IMO) unethical behavior.

In fact if Diane Colley-Urquhart were nearly anyone else at City Hall she would be in breach of their “Conflict of Interest Policy.”

It very clearly states that employees take a “leave of absence”

• An employee will be entitled to a leave of absence without pay during candidature for a provincial or federal election or by-election.

This policy applies to individuals employed by the City, including those on contract, but not including elected officials.

So there you have it; one set of standards for the peasants and another for the lords.

Shouldn’t our elected offices be held to an even higher standard? Even it is not “written in” to their policies; can they not “lead by example? Perhaps I am just asking a bit too much.


Hat tip to FFCanuck at Blogging Tories for bringing the Conflict of Interest document to my attention.

I should also note you will not find Diane’s comments on her blog as she has since deleted them. In fact she has deleted every comment from every post on the blog and no longer allows comments.


It would appear Diane Colley-Urquhart took my “advice”.