As you may recall Diane Colley-Urquhart Tweeted this bizarre comment about the Pembina Institute.

Diane Colley-Urquhart: Need to get up to speed on the Pembina Institute and your policy positions...you do good work..

It caused others to muse:

(I_Q to Diane Colley-Urquhart} you'll be kicked out of caucus before you even start if you continue talking like that.

We have seen with Guy Boutilier; speaking your mind gets you kicked out.

(russlyster to Diane Colley-Urquhart) The Pembina Institute does good work? They're probably the largest anti-oil propagandists in AB. Not something we need, IMO.

Perhaps what Diane needs to get up to speed on is that fact that the O & G industry is the largest driver of Alberta's economy, never mind the fact that she is running right in the home base of it.

We of course were questioning exactly what type of "good work" they do and how a PC candidate could possibly be taking them seriously. A true conservative would be more apt to take any report they put out with a HUGE grain of salt. If these are the types of policy positions the PC's are considering people might as well vote NDP.

Now Diane had ignored all four of these responses directed to her until I blogged about it here on August 11 at 1:00 PM.

Diane Colley-Urquhart: Sorry for the delay Jane, not intentional, I will post a reply on your blog

I waited, but nothing came. I was getting comments from others so the feature was indeed working. Then, more than a day later I get a comment from Travis, a fellow blogger that she has posted the response on her blog.

This was Diane's response. 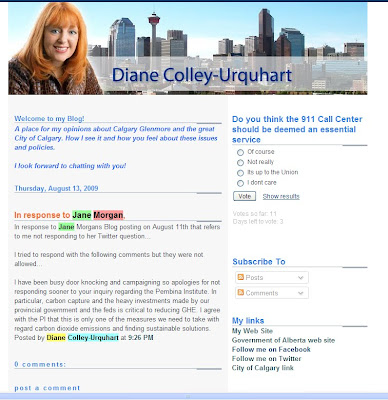 Then by 10 AM the following morning it has been removed!!!

It is only thanks to Google cache that I am able to provide you with the screen shot. Unfortunately, it does not show the comment Travis had left.

Why did she pull it?

Perhaps someone pointed out that it was a bit odd to see the name of the Wildrose Alliance's Executive Director as a subject title on her blog?

Maybe she couldn't stomach the negative comment Travis had left?

Or could it be that the PC puppet masters laid down law when because she clearly states:

In particular, carbon capture and the heavy investments made by our provincial government and the feds is critical to reducing GHE.

This speaks volumes; Diane Colley-Urquhart supports "heavy investments" for carbon capture. Not only does she support it, but in her own words it "is critical".

Her nickname of Big Red takes on a whole new meaning in this light.