Last night the sign crew got our good 'ol election truck done up with a couple of 4 X 8 campaign signs. 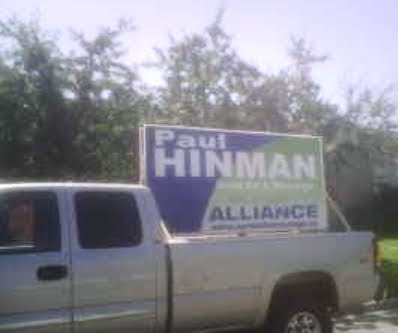 Pic was taken with my BlackBerry and is a bit blurry, but you get the idea. Today was it's first day in the constituency, busy delivering more signs.

The sign crew stopped at a local convenience store for some refreshments, when they came out there was someone who appeared to be taking down their license plate numbers. (From this truck and another)

She was in the passenger seat of a BMW. They described her as being an older woman with her hair dyed red. They thought this a bit odd, so they also took down her plate number.

A gentleman then got into the drivers’ seat. The campaign truck pulled out of the parking lot and realized the beamer was behind them. Coincidence perhaps, so they turned down a residential street and so did the car.

Turn down another street. Yup still behind them. Three turns later the campaign truck pulls over; the car pulls over too about half a block back. Truck pulls out, car pulls out…. A few back alleys and side streets later they lose the tailing car.

This is my husbands truck and he was driving it today. Now, I know he is one good looking man, hell he is HOT....and he does have a thing for older women, but he is taken!!!