For a Saturday, my stat counter is racking up the hits today; haven’t had this kind of activity since I exposed Rebecca. I also seem to have a new batch of Diane Colley-Urquhart supporters following me on Twitter.

It didn’t take long to get a response from Diane Colley-Urquhart in reaction to my morning entry. 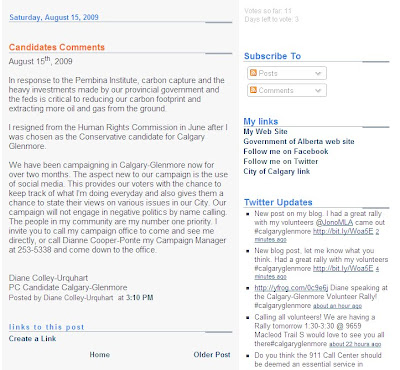 As you can see two of my three questions have been answered. Diane Colley-Urquhart has now removed my name from the entry and deleted Travis’ comment. However, she maintains her stance that investing copious sums of money in the carbon capture boondoggle is critical. So it is safe to say the Progressive Conservative’s (PC’s) will be pissing away more money on CCS.

Diane Colley-Urquhart has also confirmed her resignation from the HRC. (This question was previously brought up on Travis’ blog)

She goes on to explain how her campaign will not engage in name calling. For the most part I agree with that comment; facts certainly make a better argument than petty names. However in politics, it is inevitable. I have been on the receiving end and I sure there are examples out there of me dishing it out as well.

If Diane Colley-Urquhart is taking issue with my using the moniker of “Big Red”; she must really have a hate on for Rick Bell, he uses it no less than nine times in this article.

Lastly, it is rather comical that she posted during her volunteer rally. I feel honored that she would take time away from her volunteers and supporters to respond to a member of an opposing party.
Hmmm, wonder how they feel about it?