When things don't add up.

As a bookkeeper things that don’t add up catch my attention. This was the case recently as I read through some of the Alberta Human Right Commission (AHRC) decisions made by Diane Colley-Urquhart. 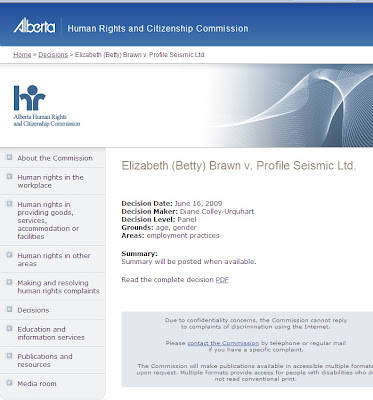 You can see from this screenshot it looks like the most recent case determined by Diane Colley-Urquhart was made on June 16, 2009. I was pretty sure she had stated she resigned after her candidate acclamation. I searched out news articles to confirm her acclamation date. Several sources confirm what we see below June 4th was the deadline for nominations and therefore by June 5 Diane Colley-Urquhart was the PC candidate.

When I re-read her comment about her resignation, I realized it is indeed ambiguous with no specific date given. One might “assume” the date was June 5 the first business day after she was confirmed. Now that was a Friday, so maybe she waited until the Monday. All we can discern with certainty it was not between June 1 and 5 and given she made an AHRC decision on June 16 it likely was not before then either. 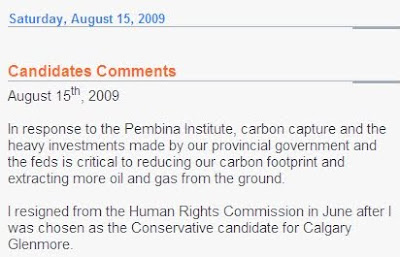 The fact that the AHRC did not remove Diane Colley-Urquhart’s bio from their website until it was pointed out only adds more doubt to the exact date of her resignation. This leaves one wondering “why be so vague” about it. If she had business to conclude with the commission, why not just say so.

Personally, I think individuals who run in elections don’t need to step down from their current paid positions until the writ is dropped or until they start “actually” campaigning. It is not an uncommon practice within in political campaigns that the candidate be remunerated from contributions, sort of “in lieu of” salary they are no longer receiving. I have never done it and I don’t condone it, for me I see it as a cost of my commitment, also I think contributions are better directed to campaign expenses. (signs, advertising, etc.)

Having said that the PC Calgary-Glenmore constituency has more than $150,000.00 in their coffers, it's well within their means to replace their candidate’s salary for the duration of the campaign or even the campaigning, which in this case started long before the writ was dropped.

Diane Colley-Urquhart is on record August 15 stating; “We have been campaigning in Calgary-Glenmore now for over two months.”


Many have criticized her for not resigning her aldermanic position while campaigning. As a Calgarian I agree, our tax dollars pay her salary and she should not be receiving it while she is clearly not carrying out those duties. This is evidenced by both her statement and the fact that she has been absent from some votes at city council.

When questioned on this Diane Colley-Urquhart said; “I am taking leave of absence and paying back my salary when the election is called.” 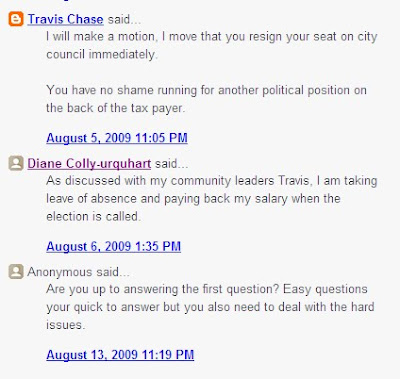 Who are her "community leaders"? Bronco? Shouldn't she be answering to the people of Calgary?

Her statement is very vague. Is she only paying back salary received from today to election day? Or is she paying back everything from when she started campaigning?

Why bother with “paying back”; why not simplify things and take a leave of absence “without” pay? Let me know what you think, vote in the poll on my blog.