In short, they engaged Calgarians, in Nenshi’s words, in “adult conversations.” This was not a campaign of sound bites; it was a campaign of thoughtfulness.

He fields an aggressive question about raising taxes. Nenshi won’t promise not to (“if any candidate tells you that, they’re lying”), and argues for an “adult conversation” about priorities.

You get the idea. Personally I didn't much care for the phrase. To me it sent the message that all conversations up to that point had somehow been childish. I found it condescending.

Alas, he became our mayor and I was willing to give him the benefit of the doubt; that what he really meant was that he simply wanted to change the tone and direction of the conversation.

However over the last couple of months I'm seeing less of the "breath of fresh air" approach and more of an "I know best" and others opinions be damned. One area where we have seen this in his recent run ins with fellow council members.

There has been evidence on Twitter as well.  Yes, there is a lot of good to be said about a person in public office who uses Twitter. However, in Mayor Nenshi's case he has gotten to the point where he simply answers puff ball questions, he deflects and/or outright ignores people.

As was the case in my very brief discussion with him last night.
Click on image to enlarge. 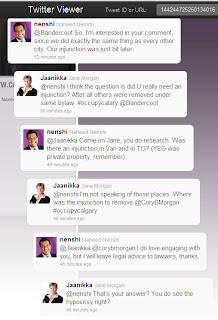 When he realized where my line of questioning was going he quickly deflected back to the "lawyers".

Does he answer my follow up questions, no. Once again goes into ignore mode.

By the way, if you enjoy your time on Twitter, I highly recommend against challenging Mayor Nenshi unless of course you have very thick skin. He has a huge following with blinders on. Tweet something positive, they will retweet like lemmings. Tweet something less than flattering, they turn to piranha and you will be thoroughly attacked. Actually, I'm quite certain this blog posting will get me sent to the Twitter gallows.

At any rate, I've determined that in my case, Mayor Nenshi and I can't have an adult conversation on Twitter. So I'm sending him an email and see if we can have success when not limited to 140 characters.