Heart of the Beast

As many have likely heard already, Occupy Calgary packed up and moved out on their own timeline; rather than have a stand off at today's court imposed 2:00 PM deadline.

Kudos to them for doing this.

In place of their tents this morning was a large metal sculpture titled "Heart of the Beast". 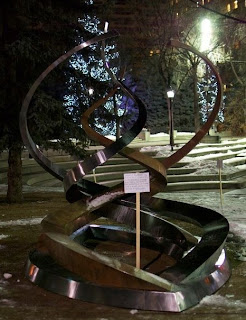 I just heard Bill Bruce (head of by-law) say on the news it will be hauled away as debris left in the park. He went onto explain putting things on property that don't belong there is in fact vandalism.

Given Cory and I were victims of a similar stunt just last night (a tent was erected and other things left in the back of Cory's truck) I can relate to what Bill is saying. However, there is one important difference. What happened to Cory and I was intimidation; the sculpture I see more as a peace offering.

Someone spent time creating it, likely with a great deal of emotion. Whether those emotions at the time were directly connected to Occupy or not isn't important. It would be very interesting to hearing the artists story behind the artwork. I see it as a gesture to remind people our rights to speak out; even when some may not like what you have to say.

I don't think it should stay in Olympic Plaza, but I certainly don't think it should be scrapped or stored away somewhere. In my opinion one of the better ideas coming out of the Occupy group was for there to be a "Speakers Corner" of sorts.  This would be the perfect opportunity to combine that idea with this artwork.

My suggested would be to have it installed at Shaw Millennium Park (skateboarding park).  I think there are a few reasons why this would be a good fit.

First, it is predominately a concrete park and this would add an element of interest. Second, this is the only park in Calgary that is open to the public 24 hours a day, 7 days a week; a speakers corner needs to be available around the clock. And lastly; it is most popular with our youth. I believe one of the greatest lessons we can instil with our youth is to speak out for what they believe in, even when the odds seem against you.


If someone has a clear picture of the "Heart of Beast" I would like to add it to this blog entry.


Thanks to @can_kt for sharing her picture.